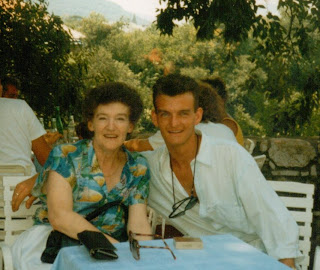 My parents were conservative Catholics. They played by the rules both in business and in life. They knew and stood for what was right. My Mother in particular was deeply religious and was heavily involved in Parish duties all her married life. She would socialise with and entertain many Priest friends. She always demonstrated her love and respect for the church and it's teaching and tried to instill those teachings and principles into her children. When she wasn't praying she was thinking about praying.

She did a lot of charity work in the local area and no Christmas would be complete until she collared my brother and I to accompany her on her 'Santa' visit to St Vincents Hospital in Athy, where we would spend hours distributing presents to every patient in nearly every ward. I can honestly say that as a 10 year old, it wasn't up there with 'my most exciting ways to spend an afternoon' but ultimately I knew it was my mother's way of showing us a Christian attitude towards others.

As a child I would meet priests regularly at home. When I was old enough, I became an altar boy and of course this strengthened my own individual respect and love for the Church. I enjoyed my childhood and I felt part of a larger family. I felt included and secure. I was comfortable.

When my parents found out what had happened to me they were told not to talk about it. In late 1970's Ireland, that was probably the best course of action. Who would dare speak ill of the church or princes of the Church. I'm sure the last thing my mother wanted to do was upset any of her priest friends by telling them what happened. I'm sure she was quite embarrassed by what happened because of her standing and reputation locally. I'm sure local clergy and Bishops would never expect a child's mother to come knocking on their door looking for answers and acknowledgement.

How very wrong they were!

Each and every opportunity that arose she was there with her account of what happened to me. She demanded answers from Priests, Bishops and Archbishops. If she couldn't get and answer she at least demanded that they listen. Unfortunately she was dismissed by each and everyone of them as if she was some demented woman rambling on about some untruth.

It wasn't until I became older that I realised how brave she was. She was going against every deep rooted principle that she held dear. She was a thorn in the side of her Church. She felt so totally let down by the very institution that she had such fervent belief in.

She had been abandoned by her mother Church and it was a horrible sight. She became withdrawn. Mass attendance was no longer a priority. We didn't see as many priests at home. I was no longer an altarboy.
We didn't kneel at night to say the Rosary.

I had changed. My parents had changed. Little did we know that our family life would be would never be the same again.

She felt as if so much had been lost, and it had. She was a one woman crusade, a lone voice and a Mother that wanted acknowledgement and justice for her son.

Why would no-one listen?

She may have felt as if she lost so much but one thing they could not strip from her was dignity and  courage.
Posted by 37 YEAR WAIT at 19:04