Responses from State and Church. 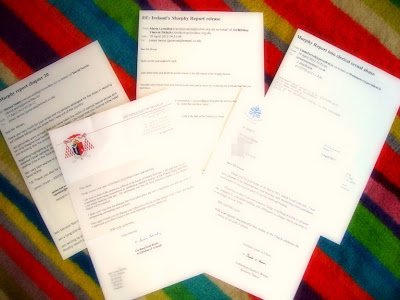 On hearing that the publication of Chapter 20 of the Murphy Report was facing a delay, I wrote to various heads of State and Church.

Some of them have responded. Some haven't. There is still no change to the mid-June date for the hearing in the High Court in Dublin, to decide details of Chapter 20's publication.

Below are some quotes from various correspondence I have received:

Vincent Nichols, Archbishop of Westminster - "I do not have influence with the Irish Government. I am travelling to Ireland in the next ten days and will speak to episcopal colleagues there about the matter you have raised."

From President Michael D Higgins' Secretary - "The president has asked me to explain that, while he has received many requests from people for assistance or intervention, he regrets that the nature of his role as President is such that he cannot intervene in or make representations about matters which come within the remit of the Government, the Courts or indeed, any of the institutions of the State which might have responsibility for the area to which your letter relates."

Senator David Norris - "I am genuinely sorry to hear that you have been the victim of clerical sexual abuse and can only imagine how horrific it must have been. I do hope that you receive some relief from knowing that the perpetrators are receiving their just rewards. Regarding highlighting your concern that the last chapter of the Murphy Report be released i shall certainly do my best to draw the attention of the Government to this whether it be in the Seanad chamber or else where. Please be assured of my support"

Archbishop Charles J. Brown, Apostolic Nuncio to Ireland - "Please know that I am committed to doing everything possible to promote the compassion, real understanding and willingness to change which you refer to so movingly in your letter."

Cardinal Sean Brady, Archbishop of Armagh - "I am sorry to hear of the abuse you suffered at the hands of Patrick McCabe. I am glad that you got consolation from being remembered in Archbishop Martin's homily at the Chrism Mass and from your earlier meeting with him. My impression was that the final redacted chapter of the Murphy Report will be released. I share your view that the changes that have taken place are only a beginning and that the work of safeguarding and healing must continue."

An Taoiseach, Enda Kenny - "The Taoiseach has noted the points you raised. He has copied your correspondence to his colleague Mr. Alan Shatter T.D., Minister for Justice and Equality for his consideration"

Mr Alan Shatter T.D, Minister for Justice via Secretary - "The position is that the Chapter 20 material has been withheld from publication on foot of a direction from the High Court in accordance with proceedings under section 38 of the Commissions of Investigation Act. These proceedings are due to be heard again in Court on 11 June. I can assure you the Minister is anxious to see that part of the report published as quickly as possible subject to the requirements of the legislation."

I have now written again, to Alan Shatter, TD - Minister for Justice, requesting that the final redacted chapter, Chapter 20 of the Murphy report be released earlier than the 11th of June. I have also requested that prior to publication, myself, and the other affected parties, are permitted to see the relevant contents.

By signing my petition CLICK HERE TO SIGN, you are helping me to keep pressure on the Government of Ireland to release this incredibly important document in a timely manner. Please help.