Coffin for a Cause. 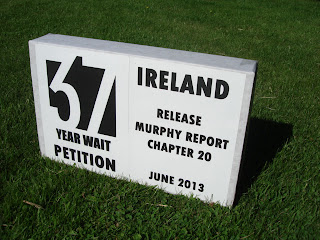 I have written to the Irish Justice Minister a couple of times now and it saddens me that I have had no response. All I have ever asked for and all I am asking for now is for someone in authority to tell me that Chapter 20 will be published without any further delay. After 37 years what does someone have to do? However this is not to be and therefore we will travel to Dublin tomorrow, 5th June to deliver the petition in person. We won't get to meet anyone of note so it may just entail leaving the Petition at a reception desk and they can choose what to do with it. I imagine it will be taken very carefully, possibly by 2 or more security personnel and placed very delicately on the desk of Mr Shatter in readiness for him to read every signature at his earliest convenience!!

Boxing up the signatures this evening was strange in a couple of ways.Firstly that over a thousand people think it's as important as I do to see Chapter 20 published and they have shown so much support throughout the process. Secondly it's almost like most of what defines me is in a box. Maybe not most but certainly a considerable amount of what my life has been about for many years. It's like a 'coffin for a cause'. This in turn is a good thing because it means the last 4 months of pestering people and all the constant reminders can be buried and the soul of the petition is now in the hands of a greater power. I have nothing more to contribute as to whether or not Chapter 20 is released. 50 plus pages of signatures will hopefully bring some pressure to bear on whoever has that final decision.

So it's off to Dublin we go for the quickest trip known to man. We arrive about 3.30pm and leave again around 5.30pm but it's not a sightseeing tour we are going for, the emphasis must be on the task at hand.

This petition may seem as if it's all about me but there are many of us involved in Chapter 20. I however have chosen to speak out, both for myself, but also for the ones who for whatever reason, cannot speak for themselves. So on behalf of everyone involved a great big thank you for your support and kindness.

The petition is still running, and with every signature, an email is generated to both Alan Shatter TD, Minister for Justice and An Taoiseach, Enda Kenny. If you would still like to show your support click here to sign.
Posted by 37 YEAR WAIT at 21:02