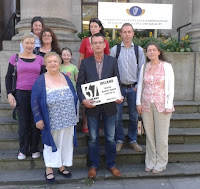 We arrived at the the Department for Justice and Equality on St Stephen's Green, Dublin to deliver the petition. We were accompanied by Deirdre Kenny - Advocacy Director  www.oneinfour.ie, whose help has been invaluable. There was a photographer from the Irish Independent waiting to 'capture the moment'.

After 5 minutes I ventured up the steps, feeling nervous and went through the revolving doors to reception. The box containing the signatures felt very light but at times it felt like lead. To me it was much more than a box of papers. It was a box of memories, triggers, flashbacks, trial appearances, and other associated negativity. On the other hand it was full of love, support, encouragement and hope.

The receptionist accepted the box when I asked if it could be delivered to Mr Shatter. Who can say whether she had been expecting us? There was no sense of surprise or curiosity. The rest of the group arrived into reception and we asked if Minister Shatter was available but she said that we needed to write in for an appointment. I said I had written but had no response. I couldn't describe the exchange or the atmosphere as warm. After lots of blank stares and moments of awkwardness we did an about turn and the door started to revolve again as we exited.

I'm not sure if I was elated or deflated. Even now a couple of days later I am still not sure. The only thing I am sure of is, we did what we could. Every single person who signed the petition deserved to see that the petition reached it's destination and will find it's way to the person intended. 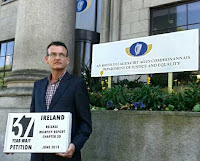 I may have been nervous whilst delivering it but I was surrounded by lots of love and support. I know my Mother would also be proud to have stood there as it would have been the culmination of much door knocking for her also.

So now we wait for the High Court hearing on Tuesday next and hope that this whole sorry saga will be viewed with one eye on history and the other on transparency.
Posted by 37 YEAR WAIT at 13:00